MARS is proud to support Milner Gardens & Woodland by donating plants and providing volunteer labour for maintenance and development of the Greig Rhododendron Species Garden.

This garden is the result of many years of planning and work through a unique partnership of Vancouver Island University, Milner Gardens and the members of all the American Rhododendron Society chapters on Vancouver Island.

The Species Garden offers the public a chance to enjoy the beauty and diversity of rhododendrons, as well as providing propagation sources for rare species and helping to conserve rhododendron species that are endangered in the wild. 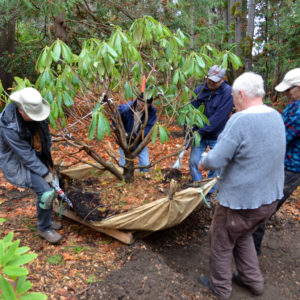 The Grieg Rhododendron Species Garden originated with an idea at the opening of Milner Gardens in 1998 and moved forward in 2008, only to be stalled by an economic downturn. Then in 2013 it took on new life when the Vancouver Island ARS chapters agreed to work together with the two other key partners.

The Species Garden is located in a 0.25 ha (0.63 acre) area of Milner Gardens that was formerly forest.  Jim Cadwaladr, a retired Landscape Architect, donated his time and expertise to develop the design.  Much thought was given to which native trees would remain.  All trees were inventoried and a case was made for each tree, providing a variety of majestic old-growth trees, a nurse log, and some dead trees to provide habitat for birds and small animals. 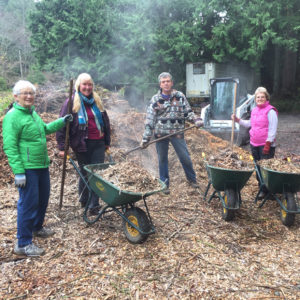 Our intrepid MARS volunteers tackle everything from fence construction, to spreading tons of mulch, to planting rhododendrons and companion plants, to constructing shade-cloth shields to protect newly-planted rhodos.

Work is ongoing to complete and maintain the Garden’s collection of rhododendrons and companion plants, along with benches and interpretive signs.  Like all gardens, the Greig Rhododendron Species Garden is a work in progress, and MARS is pleased to provide our continuing support to help it grow.

We need volunteers!  If you can help, please contact Marilyn Dawson at

After the site was cleared in 2016, approximately 460 cubic metres (600 cubic yards, or 40 dump-truck loads) of a special soil mix were brought in and spread.  An irrigation system was installed, and about 150 cubic metres (200 cubic yards) of mulch were spread by hand by volunteers.

The first planting in spring of 2017 included 160 carefully selected rhododendron species.  (When complete, the garden will house approximately 250 different species.)  The following spring, volunteers planted eighteen large specimen trees as companion plants.  The project is ongoing, and additional rhododendrons as well as a large array of perennials have already been planted.

Just before the pandemic shut down all public gatherings, MARS members approved donating $5,000 in the name of all District One Chapters to the Greig Species Rhododendron Garden at Milner Gardens and Woodland. This was part of the proceeds from the 2019 Fall Regional Conference held in Parksville. Almost immediately
Milner shut down (due to the COVID-19 pandemic). But recently with the garden partially open to the public, Linda Derkach, chair of the Fall Conference, presented the cheque to Milner Executive Director Geoff Ball at a gathering of chapter presidents.  The funds are earmarked for long-time care of the garden’s rhododendrons.

Read the complete article in the October 2020 Rhodovine

Since it opened officially two years ago, a work crew from the island chapters has turned out when asked to mulch, plant and do whatever is needed. But illness, work or age-related problems are creating dwindling numbers. For a few weeks this summer, four to five members helped get the garden in shape before it re-opened to the public but it is the same people every week.

MARS needs new volunteers to add to the Milner crew to spread the work around. Some jobs require more hands on deck. During the pandemic, all work is carried out under COVID rules.  To join the crew contact Marilyn Dawson at

It’s not a glamorous task but it’s a good way to meet fellow gardeners and socialize while you work. Crew members are usually informed a week ahead of time and are not expected to appear for every call. Life does get in the way sometimes.

After many hours of planning and hard work, on Sunday, April 22, 2018, more than 150 plant enthusiasts gathered to celebrate the Grand Opening of the Greig Rhododendron Species Garden.

The Species Garden is named after Ted and Mary Greig, recipients of the ARS Gold Medal.  Mary Greig of Royston on Vancouver Island was a pioneer hybridizer and propagator of rhododendrons, and many of her plant progeny thrive in Milner Gardens to this day.  The Garden was officially opened to the public with a ribbon-cutting by Jean Greig, the late Jim Greig’s wife:

Special guests at the opening  included VIU President Dr. Ralph Nilson, Chief Michael Recalma of the Qualicum First Nation, Geoff Ball, Executive Director of Milner and descendants of Ted and Mary Greig for whom the garden is named.

This website uses cookies to improve your experience while you navigate through the website. Out of these, the cookies that are categorized as necessary are stored on your browser as they are essential for the working of basic functionalities of the website. We also use third-party cookies that help us analyze and understand how you use this website. These cookies will be stored in your browser only with your consent. You also have the option to opt-out of these cookies. But opting out of some of these cookies may affect your browsing experience.
Necessary Always Enabled
Necessary cookies are absolutely essential for the website to function properly. This category only includes cookies that ensures basic functionalities and security features of the website. These cookies do not store any personal information.
Non-necessary
Any cookies that may not be particularly necessary for the website to function and is used specifically to collect user personal data via analytics, ads, other embedded contents are termed as non-necessary cookies. It is mandatory to procure user consent prior to running these cookies on your website.
SAVE & ACCEPT