As part of our mandate to raise public awareness of the genus ‘rhododendron’, we have an active Propagation Group.  An informal sub-group of our main membership, the Propagation Group takes cuttings from a wide range of hybrid and species rhododendrons, from heirloom varieties no longer available in stores, to garden standbys, to rare and unusual types. 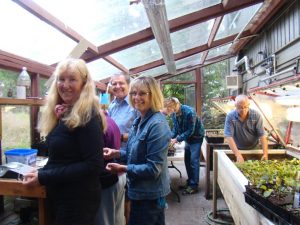 Group members get together in planting bees, where raw cuttings are prepared by stripping away lower leaves, wounding the stem, and dipping in hormone powder.  The prepared cuttings are then stuck in propagation medium and rooted under controlled temperature, light, and humidity conditions.

For the first three weeks, the light, warmth, and humidity ‘wake up’ the cuttings so that they start to grow callus tissue at the cambium layer of the cut stem. After about 6 weeks, roots start growing from this callus.  Then leaves develop, creating a whole new plant. Due to a variety of factors, some cuttings taken in late October/early November don’t “take”, most likely due to their being collected at their wrong physiological state, i.e., after they have hardened off too much.  Our group is relatively new at propagation, so we’re experimenting to see if we can increase our success rate with specific varieties, under the guidance of our retired commercial propagator Rose Prufer. However, even professional propagators don’t achieve 100% success with all varieties every year, so this is likely to be an ongoing work-in-progress.

From the cuttings that survive, the tiny plants are grown on and repotted as they get bigger, to be sold to the public or given away in raffle draws at our meetings.

Here’s a video created in April 2020 for us by Christine Quist, Vancouver Island University (VIU), of our propagation results last year in a VIU greenhouse for the 2020 crop of cuttings (struck November 2019, see propagation article below), which were being cared for then by staff from VIU since we didn’t have access to the greenhouse during the 2020 spring COVID-19 situation.
(Click on the image to go to the video, then click the Play button to view) The MARS 2019 crop of rhododendron babies – happily growing on at Milner Gardens.

With Milner Garden reopening on February 5, I was able to sneak a peek at some of the rhododendrons and companion plants we propagated in 2019. Although partially covered by falling debris from nearby trees, they seem to be holding up well.

Our 2020 cuttings have found homes in three propagators that were built at the end of the year and at least one member’s garage windowsill. David Landry says the propagator he is shepherding is holding moisture and staying at about 10 degrees, and cuttings are looking good.

Advice on Fertilizing
(For those of you who have plants in pots at home, here is some information on fertilizing.)

The next step is to fertilize. With her extensive experience, Rose Prufer was able to provide some useful information. “Newly rooted cuttings should be fertilized in about March
with a liquid feed of a balanced product such as 20-20-20,” she said. “The trick with liquid feed is to ensure sure every cutting receives the same amount of fertilizer, which is trickier than one would think.”

For the 2019 cuttings, Rose said plants should be fertilized with a slow-release product in late winter/early spring. Containers should be top dressed with something like a 16-10-10 (Nutricote is her favourite). Fertilizer should be weighed using a small food scale so that a one-gallon pot receives 12 grams, two-gallon pots get 16 grams and three-gallon pots get 20 grams. “We used to use old film canisters attached to a stick to deliver the fertilizer,” she said. However, since those are a thing of the past, perhaps a pill bottle would
work in the 21st century.

Note: Since I am very new at all this, I’d love advice from members who are experienced propagators. Please share your tips, tricks and advice with me. Thanks. One of the new propagation units in Glen Jamieson’s garage.

Since the beginning of November, MARS members (Guy Loyer, Dave Landry, and Glen Jamieson) have built three new cutting propagators, each about 3 x 4 feet, and each capable of holding six 32-cell trays, plus about another 18 individual cell pots (210 cuttings). Designed to operate individually over the next few years, but which can be linked together when a permanent location is determined, they are presently being held by Don Bridgen (garage), Dave Landry (greenhouse), and Glen Jamieson (garage).  They are heated from below with cables buried in sand, and Glen’s (shown in photo above) is presently lit by two fluorescent tubes.  Watering is by hand misting about every other day, but when permanently located, this will be automatically done with a timer.

The cuttings currently in them were 1) taken from the Smith garden in Courtenay on October 26/20 by Glen Jamieson and Rose Prufer, and potted up on October 27/20 by Marilyn Dawson, Dawn House, Don Bridgen and Rose Prufer, led by Katherine Wasiak, and held on heat mats under lights at the Dawson garage until the propagator boxes became operative on November 13/20, and A note from Rose: If it wasn’t for COVID I would certainly post photos of happy, smiling people during our sessions since we do have a great time.

2) largely collected by Rose Prufer from the Jamieson, Derkach, England, and Dawson gardens and potted up in the Dawson’s garage on November 12/20 by our intrepid crew of Marilyn Dawson, Rose Prufer, Dawn House and Linda Nicol, led by Katherine Wasiak.

Cuttings are planted in a roughly 1:1 coir and coarse perlite mix. Hopefully our propagation will be successful, which we will know in a few months if roots gradually develop. Repotting will be planned for next summer or fall.

Rooting cuttings from last year’s VIU propagation effort were held through the summer at the Loyer, Jamieson, Dawson, and Thompson gardens. Those held at the Loyers and Jamiesons were repotted up with the assistance of Rose Prufer and were moved on November 13/20 to a plant grow out area kindly provided by Geoff Ball at Milner Gardens for overwintering. Marilyn, Glen, Guy, and I went down to the VIU Greenhouses on May 22 and brought home all the rhodo babies.  Sending a big ‘thank you’ to:

Now to the Results:

We have been quite surprisingly successful on our first solo propagation mission – although, as you can see many people helped make this a success.  We have an 83% survival ratio for 45 varieties of Rhodos, and for the vaccinium ovatum (Huckleberries), we had 100% survival of the cuttings!

We have 496 named rhodo babies, 16 vaccinium ovatum, 5 unknown rhodo babies and a couple trays more of rhodo babies for which Glen is sorting out names.  We now have new rhodo babies of 74 varieties, not counting our survivors from previous years!

Now, to be fair to our brave members who are growing the rhodo babies on from here (Marilyn, Glen, Guy, and myself), we counted them as survivors if they had at least 1 green leaf.  Many have lots of new leaves, but those with just one leaf, or a few soft leaves are not likely to survive the next round, so please do not count on having all of these to raffle or sell next year.

We will keep data on how well they survive from here, and this will help us plan for the future.

Again, thanks everyone, and we should pat ourselves on the back for a successful project so far! 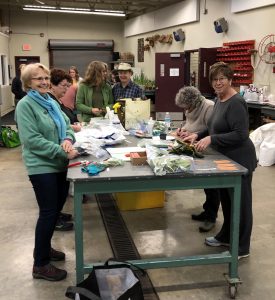 Although old hat for some, this was a fascinating learning experience for others. We discovered (the hard way) that it is smart to pour water into the perlite bag before scooping it out to dampen down the unhealthy dust. We learned the recipe for a good propagating medium – 5 parts perlite (large and small) to 2.5 parts fine coconut coir. We saw that the best cuttings are taken from semi-ripe and not woody stems, and we were shown the correct way to trim cuttings (don’t squish stems and wound on one side of stem by cutting into the 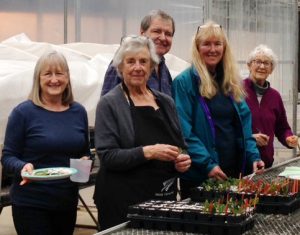 outer layer, not the deeper cambium layer, which carries nutrients).

With assembly-line precision, cuttings were taken, wounded, moistened and dipped in rooting hormone before being carefully placed in pots. We also realized the importance of keeping careful records, labelling cuttings and creating a master list of plant numbers and varieties.

MARSians came together after a good morning’s work striking over 600 cuttings! What fun it was working together, laughing, sharing information, learning new skills and accomplishing a lot in a short period of time. Now the hard part – waiting patiently to see results of our efforts. Fingers crossed!

Some of the MARS Propagation Group

This website uses cookies to improve your experience while you navigate through the website. Out of these, the cookies that are categorized as necessary are stored on your browser as they are essential for the working of basic functionalities of the website. We also use third-party cookies that help us analyze and understand how you use this website. These cookies will be stored in your browser only with your consent. You also have the option to opt-out of these cookies. But opting out of some of these cookies may affect your browsing experience.
Necessary Always Enabled

Any cookies that may not be particularly necessary for the website to function and is used specifically to collect user personal data via analytics, ads, other embedded contents are termed as non-necessary cookies. It is mandatory to procure user consent prior to running these cookies on your website.